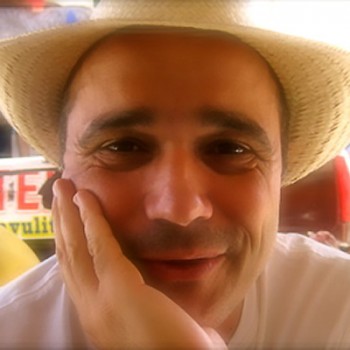 Dimitri Mugianis is an activist, anarchist, community organizer, artist, and  Bwiti N’ganga (spiritual healer). Raised in Detroit during the ‘60s and ‘70s, Dimitri was greatly influenced by that artistic and revolutionary epoch.

As a young teen he and a friend formed the experimental band known as The Leisure Class. After experiencing several years of local success, the band moved to New York City in 1983. There, Dimitri found a home at the Chelsea Hotel, and quickly developed a close mentoring friendship with one of its other residents—the beat legend Herbert Huncke. At that time he also began a relationship and dependency on cocaine, heroine, and methadone that would last him over 20 years.

After enduring the drug-related deaths of many members of his communities— including his pregnant, common-law wife, Dimitri was resigned that his life was nearing an end, and decided to seek out an Iboga treatment in Holland, visit his ancestral homeland of Greece, and return to the basement of his parent’s home to die. But the Bwiti and Iboga had other plans, ending his dependency to drugs (without withdrawal) and starting him on a journey of spiritual and emotional recovery—initiated by several months of healing and reconnecting in Greece.

Returning home with an evangelical zeal, Dimitri sought out and met the father of the Ibogaine movement, Howard Lotsof, who quickly became his mentor. In an effort to bring the medicine that healed him to those without access, he attended to approximately 500 underground Ibogaine ceremonies/detoxes.

He also co-founded VOCAL (Voices of Community Advocates and Leaders), traveled to Gabon to become initiated into the Bwiti (returning several times for spiritual strengthening and study), co-created the “Universalist Bwiti Society” (a state- registered religious institution), and has spoken and lectured at numerous conferences around the world.

He is the subject of the documentary I’m Dangerous With Love, and has been featured in many media outlets, including HBO’s Vice, National Geographic’s Drugs. Inc., NPR’s This American Life, The Daily Beast, The Huffington Post, The New York Times, and a feature cover story in The Village Voice.

Owing to his high profile, Dimitri was arrested in 2011 by the DEA in a sting operation using a paid informant. After a protracted legal battle he was convicted of greatly reduced charges. This experience was the impetus for his cofounding of the Universalist Bwiti Society.

He is currently the N’ganga-in-residence at New York Harm Reduction Educators (NYHRE a syringe exchange in East Harlem), where he is also the co-creator and co-facilitator of “We Are The Medicine,” a holistic approach to drug use and life. He is involved in numerous other projects including working on bringing Iboga to Afghanistan and Nepal, several media endeavors, and a private healing practice.

Consumption or Contribution?
The commodification of psychedelics as colonialization of plant medicines

The commodification of psychedelics, and the desire to quantify their role, stands in direct contrast to most psychedelic experiences. The natural tendency for scientific consumer-driven culture toward reductionism encounters dissonance when interacting with the value and promise of plant medicines. If we are to move toward a more holistic, integrated approach to medicines, we must examine how these medicines are now situated in our society. We must ask ourselves if we want plant medicines to be controlled and regulated within the confines of status quo professionalized healthcare, under the auspices of the hospital or the profit-generating clinic. Placing these medicines in the context of professionalized medicine, in a consumer capitalist materialist society, jeopardizes their integrity and threatens that they will be colonialized, perpetuating historic patterns that disenfranchise and disempower. In this scenario, we may be risking the subjugation of the plants in much the same way we have historically subjugated racial populations and entire cultures.

Giving up one’s own and our collective power and agency – whether to the medical establishment or to the shaman – is a betrayal of plant medicines. The pathogen movement – viewing addiction as a disease, akin to physiologic illnesses such as cancer – is increasingly nihilistic, inward looking but rarely reflective, and is dissociated from concepts of, and struggles for, social justice, equality and human rights.  Despite our intention to heal, to seek expanded experiences, and for social transformation, however authentic it may be, if enacted within a corrupt model, it will yield corrupt results.

Plant medicines open mind and spirit, and offer new possibilities and horizons. They invite us to reimagine ourselves in the world around us, but societal structures work toward the consolidation of social power, and the commodification of tools, substances, and rituals. These two pathways operate at odds with one another. How can we re-imagine the use of psychedelics away from the external culture that is destroying the planet and our own humanity?

… And there can be no great disappointment where there is not great love. I am disappointed with our failure to deal positively and forthrightly with the triple evils of racism, economic exploitation, and militarism.
— Martin Luther King, Jr.: “Why I Am Opposed to the War in Vietnam,” Sermon at the Ebenezer Baptist Church on April 30, 1967