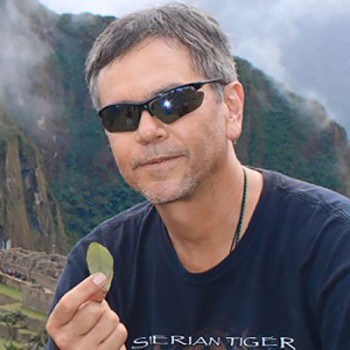 Psychiatric Distress and the Meaning of Life.

Brad Adams received his Ph.D. in counseling psychology at USC.

He works in cancer research at the UCLA medical center as a project manager for lung and breast cancer studies.

He is also currently working with Drs. Charles Grob and Dennis McKenna on a study in the Sacred Valley of Peru using Ayahuasca.

Ayahuasca, Psychiatric Distress and the Meaning of Life:
Results from a Pilot Study in Peru

Rigorous scientific investigation into the healing powers of plant medicines is a necessary step for eventual legalization. Dr. Adams, along with Drs. Charles Grob, Dennis McKenna, collected data from 18 participants who attended a week-long retreat in the Sacred Valley of Peru, which included 3 Ayahuasca ceremonies. Psychiatric symptoms of distress (e.g., depression, anxiety, et al) were assessed, as were measures of existential meaning and purpose in life, before and after the conference, as well as 3 and 6 months later. Eight of the 9 distress dimensions showed increasing improvements at each successive time point. Perhaps the most dramatic result was a 52% drop in depression scores from baseline by the 6-month mark. All existential measures improved, but most of these were not statistically significant, the one notable exception being a modest-but-significant increase in the Death Acceptance dimension, which refers to the absence of fear and anxiety about death and the acceptance of death as a natural aspect of life. Participants were also asked to describe their experiences over the 3 ceremonies and what they felt they gained. These results, as well as possible mechanisms for the results will be discussed, as well as a few individual cases.

Quote from one of the participants after the last ceremony in response to the question, “How would you
describe your experience with Aya?”:

Working with Aya has been a totally transformative experience and maybe one of the most important ones of my life. It has given me an opportunity to correlate data from different levels of my being — cognitive, emotional, creative, psychological, familial, existential — and integrate the various threads into a unified whole. I have tapped into an awareness of grace and unity and felt a gratitude that was heretofore unknown to me. I truly feel like I have healed from the past and seen a vision of a healthier, happier, more whole future and I can’t wait to get to the work of manifesting it.